One of the common reasons for calling a specialist in vibration diagnostics is noise from the unit. Sometimes the reasons are commonplace: a plastic bottle stuck between the fan blades (noise + vibration), lack of tightness of the door to the air conditioning fan chamber (whistling noise), faulty pressure valve in the ventilation network (periodic noise + vibration), etc. But more often, extraneous noise is a consequence of mechanical problems of the unit, which are the task of technical diagnostics to identify.

In this article I want to share one case that, as for me, leaves a few questions to think about. 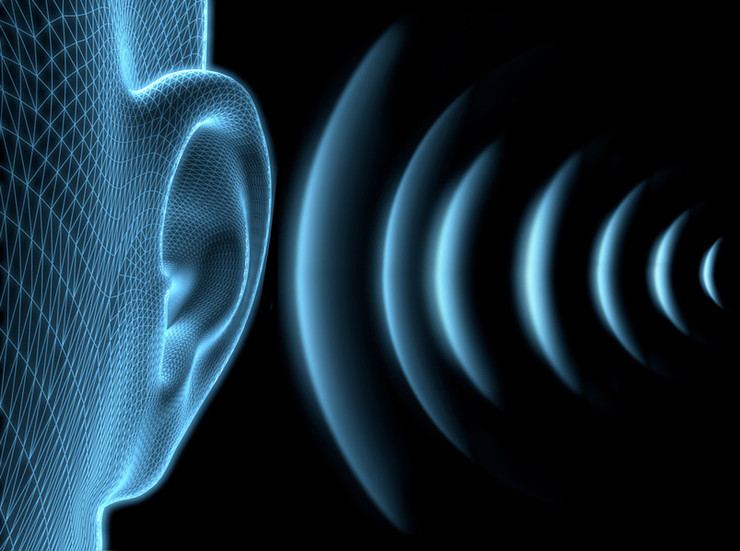 When the fan is turned on, a strong constant hum of mechanical origin is heard (it is not difficult to distinguish from peculiar electrical noise). Since the design of the unit is elementary, noise sources can be either bearing defects or impingement on the diffuser by the impeller.

Vibration tolerance of 4.5 mm / s - the vibration level is normal. Here is an example showing the sadness of GOST on vibration to assess the technical condition. What can be said about the general levels of vibration velocity? Almost nothing. Bearing No. 1 of the electric motor seems to be more vibro-loaded, but for such a design with imbalance of the impeller this is normal (the shaft behaves like a beam with a fulcrum on bearing No. 2).

Therefore, we turn to the estimation of direct spectra of vibration velocity. Spectrum at 1V: 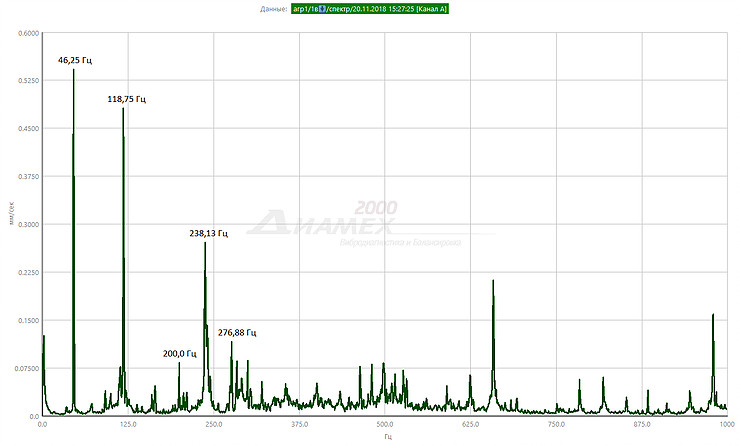 It can be seen from the spectrum that the contribution of the reverse component of 46.25 Hz is not large. A clear peak of 118.75 Hz is striking, +/- 38 Hz are noticeable on both sides from 238.13 Hz (+/- double separator frequency?), Almost the entire frequency range of the spectrum is noisy (increased friction?).

Using the spectrum of the envelope of the vibration signal, we will see the presence of shock components at point 1V: 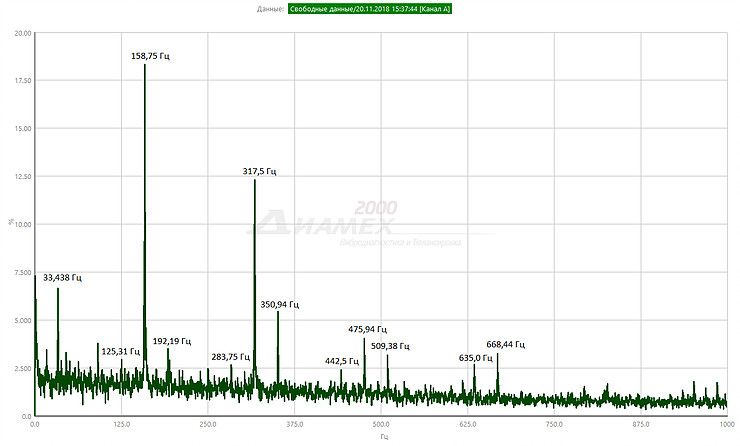 Levels are not critical, but there is a defect. Beats occur at a frequency of 158.75 Hz and its harmonics. Each harmonic has side +/- 33.5 Hz frequencies. Since there is no information about the bearings, I suggested that there is a defect in the outer ring (according to the experience for 3000 rpm in the region of 120 ... 160 Hz the frequencies of the outer ring of the bearings lie), accompanied by jamming of the cage twice per revolution of the motor shaft. On the second bearing, the picture is similar, only the levels are much lower. The low level of modulation with such a strong noise is embarrassing. 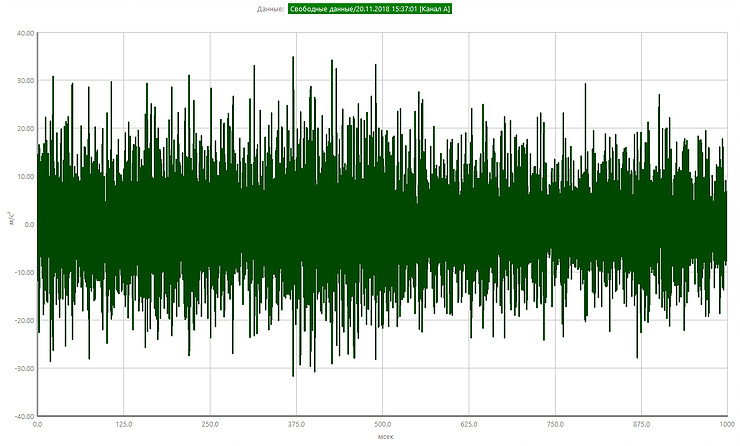 Next, we evaluate the noise on the coast. With a drop in speed after turning off the unit, the frequency of noise becomes visible to the human ear. In general, the presence of developed defects in the bearing is fairly accurately determined by ear through a metal tube or wooden stick. In this case, even a tube was not needed. At low speeds, the noise of rolling balls in one of the bearings of the electric motor is heard. I wrote off the act recommending the replacement of bearings No. 1, 2 of the electric motor.

The resistance of electricians was overcome (they demanded a “commission” listening) and the bearings were replaced. As it turned out, 80201 sealed bearings were installed in the electric motor with the following parameters for calculation:

The results of the calculation of bearing frequencies:

Both bearings were taken from electricians for study. Just bearing No. 1 turned out to be defective - when rolling on a flat surface, jamming was felt. Now I propose to take a look at the analysis object in a disassembled form (I apologize for the poor quality): 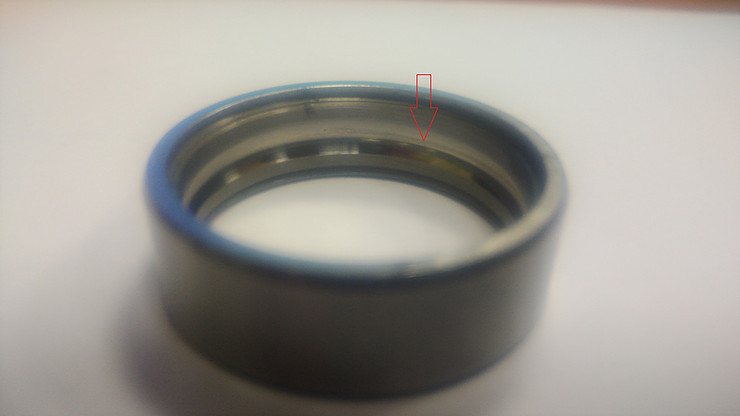 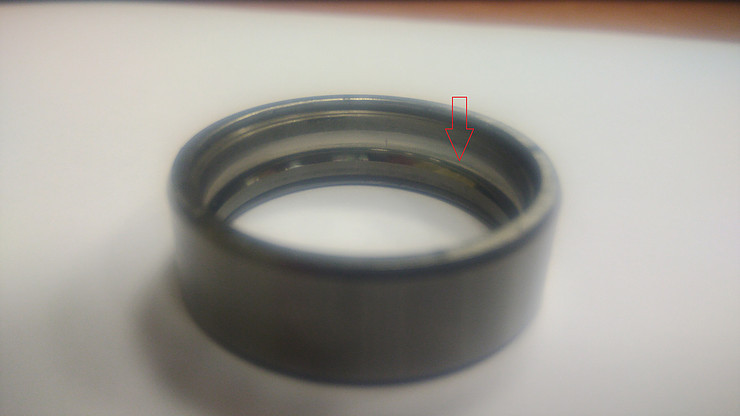 On the outer ring, two defects were found against each other - the wear of the tracks. Each track occupies 1/4 of the track length, located exactly in the center of the track. This fact is expected to explain the presence of two harmonics of the frequency of rolling of rolling elements along the outer ring. Due to the fact that the defect does not cause shock components, but is characterized only by a local change in the coefficient of friction, it is more clearly expressed in the direct spectrum of vibration velocity. As for the envelope spectrum, I would explain the presence of harmonics of 158.75 Hz and the side components of the double separator as a defect of the friction group. With the passage of defective places on the outer ring, the rotation frequency of the rolling elements increases, which increases the friction of the rolling bodies in the separator, which changes its frequency of rotation. That is, at the initial moment of passage of the defect of the outer ring, the separator is braked, and when it leaves the defect, it accelerates. Two defects, two acceleration / braking per shaft revolution, respectively, the double speed of the separator relative to the fixed ring.

After replacing the bearings, the motor was idled. After switching on, the operation of the electric motor was accompanied by uneven noise for a couple of minutes - lubricant distribution, running-in. After mounting the electric motor at the place of operation, the fan worked quietly, the problem of extraneous noise was solved.

This article should end here, and you, dear reader, please express your point of view regarding the presence of a frequency of 158.75 Hz and its harmonics, and also offer a version of the cause of defects on the outer ring. Waiting for you in the comments to the article!