I have seen a lot in my practice, I had to work with many equipment, but I did not encounter screw pumps. They are very expensive, including in maintenance, and, accordingly, are rare. And so it happened. The problem is immediately with two pumps Н1В 20/5 - 16/5 (N = 5.5 kW, n = 1440 rpm).

I'll start with their story. They never turned on, after an indefinite time after installation, the room with them was flooded. Under one and a half meters of water stood for about a year (or maybe more, this mystery is covered in darkness), until it was time to exploit them. After pumping water out of the room, the electric motors were dried, the bearings in them were replaced, testing was performed at idle with vibration measurement (not exceeding 1 mm / s). My colleague was present at the start-up of the units, and in addition to the loud noise from the pumps, he recorded a vibration of about 17 mm / s. The pumps were stopped and taken out for repair. Repairmen washed bearings, filled grease, cleaned the inside of the pump from dirt. After decommissioning, they called me for testing.

Scheme of the pump unit with indication of measuring points
Turn on pump No. 1 and measure the vibration (RMS vibration velocity in the range of 10-1000 Hz, mm / s):

Vibration tolerance in accordance with factory documentation 2.0 mm / s. As you can see, the tolerance is greatly exceeded. The operation of the unit is accompanied by a loud noise from the pump. Additionally, I take measurements on the pump casing in the horizontal-transverse direction and compare the results for this direction.

Indeed, the source of noise and vibration is the flow part of the pump. We note the negative pressure on the manometer of the suction line (arrow just below "0" - is the manometer defective?). Turn off the pump.

The pump also works with noise, turn it off.

Let's move on to vibration analysis of pump No. 1. To be honest, I ran into some panic in my head. The fact is that I have no habit of giving any conclusions from a fool. I work on the basis of justification. Therefore, I had to spend a lot of time studying screw pumps. As always, there is little information on the Russian-language Internet, so I had to go over foreign articles. Looking ahead, I’ll say that I got a lot of information, but I didn’t find a concrete answer to this case. We analyze the vibrational velocity spectra of the bearings and pump housing in the horizontal-transverse direction: 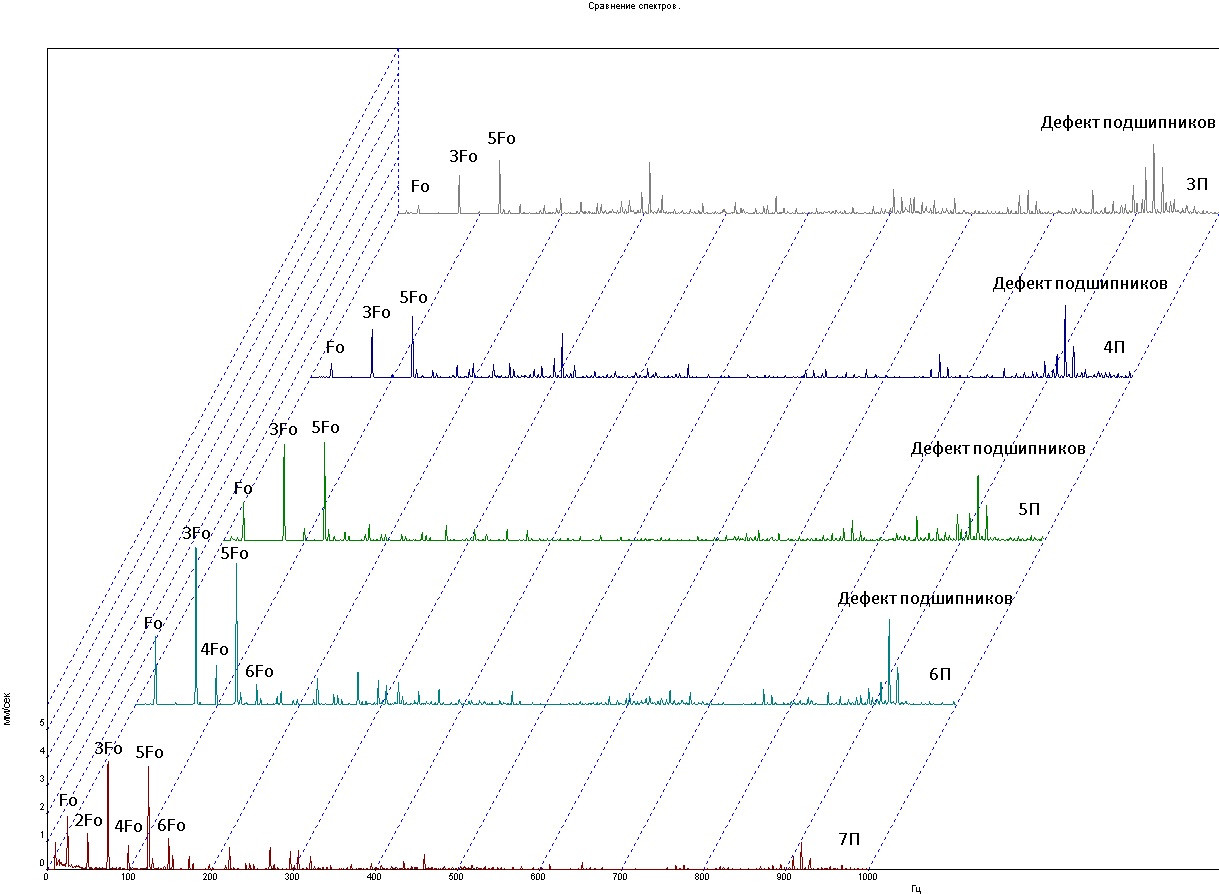 The high amplitudes of the harmonics of the rotational speed Fo indicate a strong screw fight in the pump housing, which is probably caused by the instability of the screw contact with the cage surface. In my opinion, this may be due to the presence of air between the screw and the holder, or due to severe damage to the working surfaces (according to the repairmen, the surfaces of the screw and holder are ideal, but I have no habit of trusting words - I burned, I know). The vibration examination protocol reflected the following possible causes of this behavior:
- lack of pumped medium due to overlap of the suction channel;
- airness of the pump;
- air access to the pump;
- defects in the surfaces of the screw and ferrule;
- the presence of large foreign matter in the pumped medium (in the absence of filter screens at the inlet). 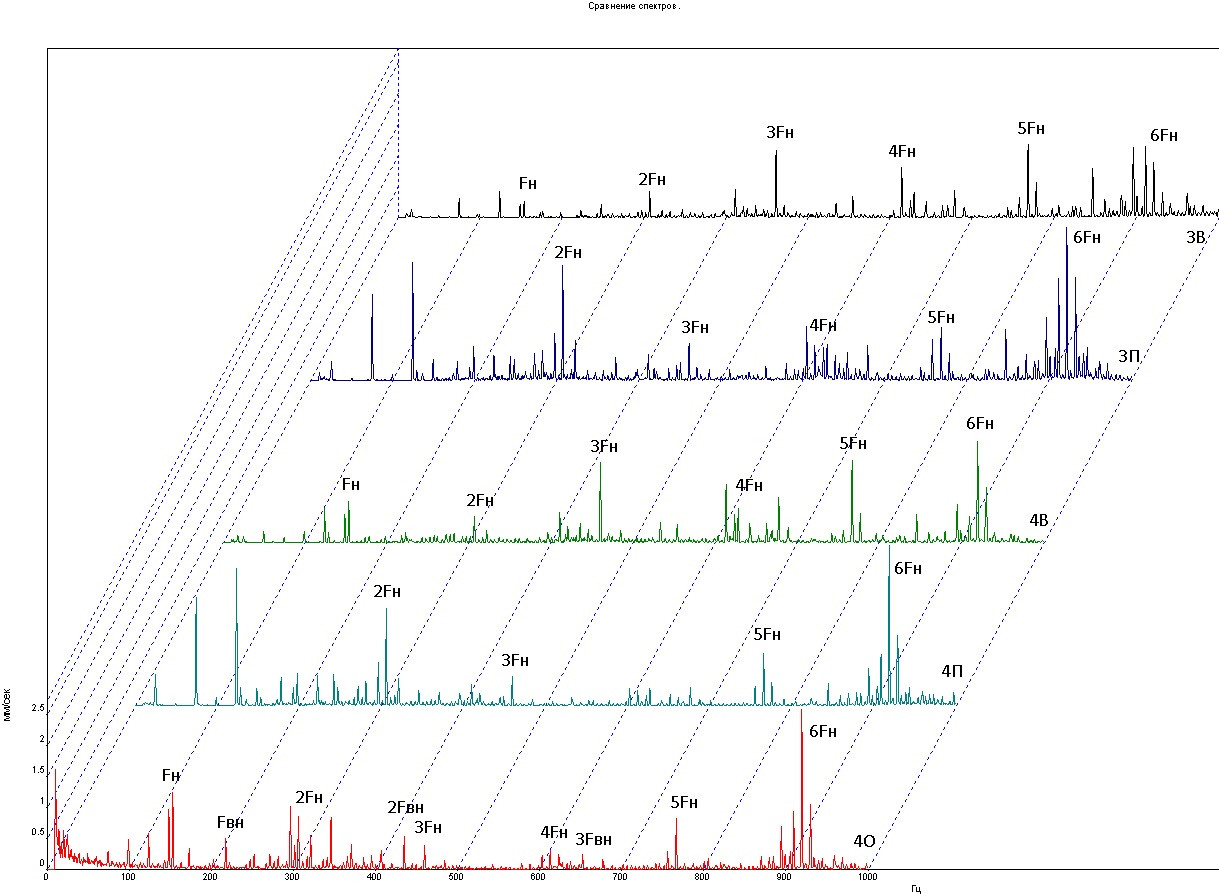 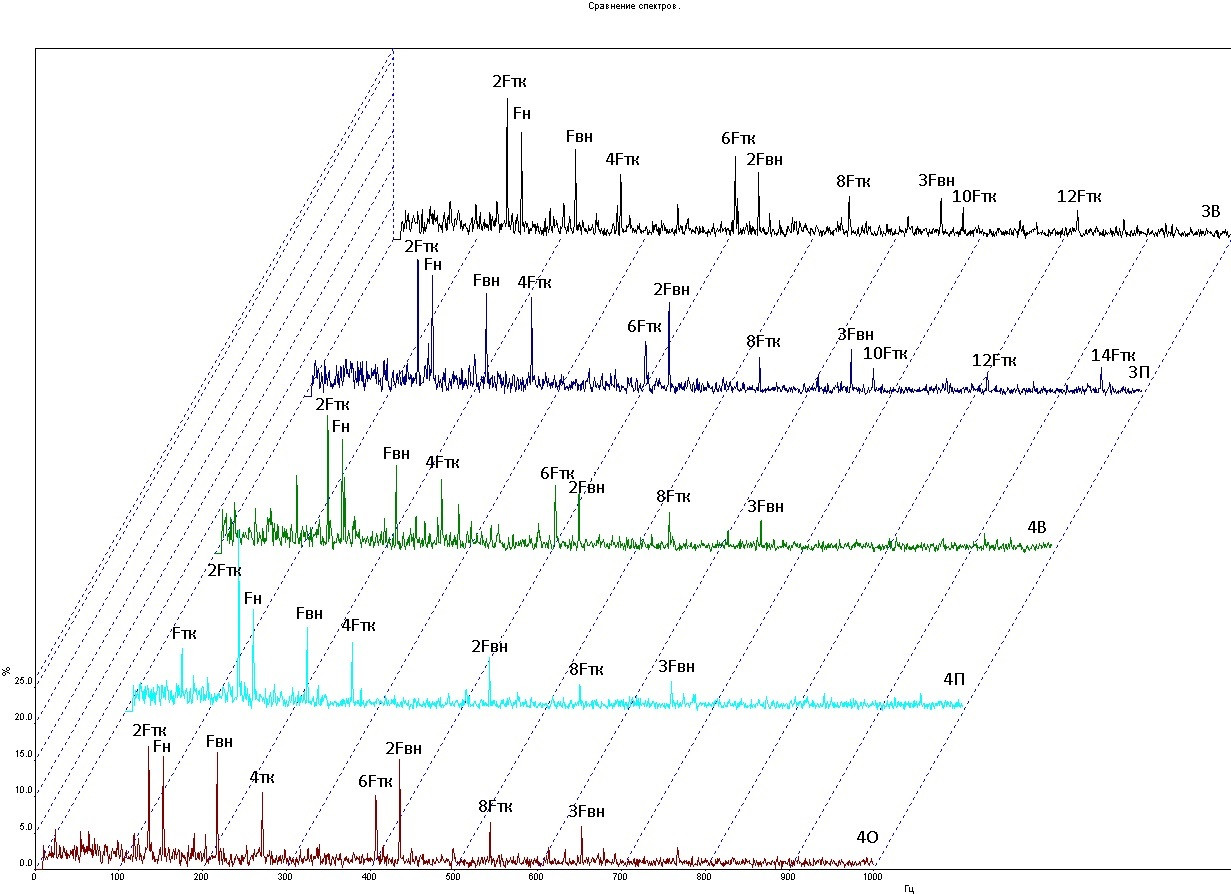 In conclusion, I made the following recommendations:
- replace bearings No. 3, 4 of the pump;
- ensure the serviceability and operability of pressure gauges at the suction and pressure of the pump;
- check the absence of overlap of the passage on the suction line;
- check for lack of air after filling the pump;
- when repeating extraneous noise and increased vibration during pump operation, inspect its working parts and assemblies.

The vibration spectra of pump No. 2 are similar, only there are no bearing components. Envelope spectra are almost empty. Therefore, the reasons and recommendations are the same as for pump No. 1, but without complaints about the bearings.

A few days later, the pipelines on the suction lines of the pumps were dismantled and “greetings” from installation were found:

Plastic plugs with holes in the center are the cause of all problems. The diagnosis was confirmed. Regarding bearings, they did not change, but there will be an opportunity to re-defect them when testing pumps without plugs.