In this article I want to highlight a relatively rare defect, which is usually called the coupling leash effect. The problem is the uneven loading of fingers in the holes, which leads to an uneven load on the fingers during operation of the unit. As a result, a radial force appears, transmitted to the bearings, the vibration of which we measure. The defect is manifested the stronger, the more fingers in a row are incorrectly loaded (in other words, the more fingers do not participate in the operation of the coupling). Let's move on to a real practice example. 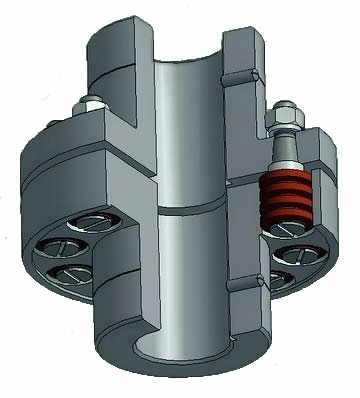 We have many vertical pumps with a capacity of more than 200 kW. And once, after seven months of inactivity, one of them was launched. Vibration on bearing No. 1 of the electric motor exceeded 5 mm / s with a tolerance of 4.5 mm / s. Previously, vibration was always stable 2.7-3.0 mm / s. According to the spectra, only the amplitude of the reverse frequency increased. When scrolling at idle, the vibration did not differ from the one that was idling earlier. Is there a problem in the pump? It only occurred to me that there might be a problem on the impeller. The destruction of the blade? Did something sail and catch? Repairmen proposed to rotate the rotors of the electric motor and pump relative to each other by 180 °, which was done and reduced the vibration to 3 mm / s.

After a couple of months, a similar change in vibration occurred on another pump. Increasing the amplitude at the reverse frequency, checking the electric motor at idle, turning the rotors 180 ° and the problem is solved. Thoughts in my head were already swarming about the pulling effect of the coupling, but it had to be proved somehow. Therefore, I agreed with the owner of the equipment that the next time we repeat such a case, we will deal with the coupling.

And now, a month later, such an incident presented itself. During vibration monitoring after starting a similar pump unit, the vibration parameters are exceeded. 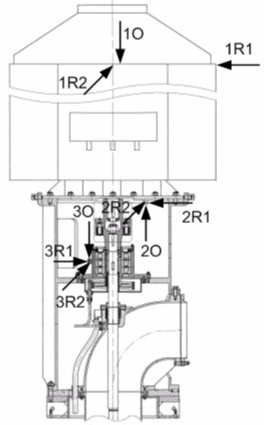 Vibration velocity measurement data in the range of 10-1000 Hz:

Everything repeats as on the last two pumps. I refuse to scroll at idle and proceed to inspect the coupling and measure the clearances on the fingers (probes 0.02-0.5 mm). 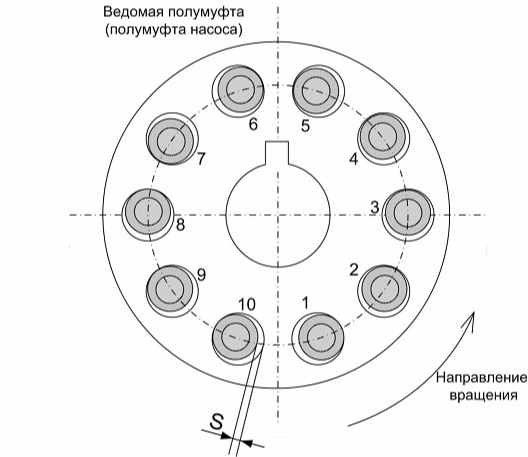 When examining the coupling revealed the absence of play of the coupling half relative to each other, the coupling is practically jammed. As you can see from the table, fingers 6, 8, 9, 10 are problematic.

We take out the problematic fingers and examine them. Visually no problems are visible. We put it back, twist, measure the gap. Is the clearance bad? We turn it in the hole, twist it, measure the gap again. And so on until we get the optimal result. There is not enough space (uncomfortable), time is running out (the pump is urgently needed), so we were in a hurry and got this result:

The necessary clearance of the coupling halves appeared. All operations took about 40 minutes. We turn on the pump and measure the vibration:

Vibration decreased by more than 2 times, the results are acceptable. When repeating the problem, we agreed with the owner of the equipment to perform a finger inspection for bending (to measure geometric deviations), and to inspect the tapered seats of the drive clutch.