Rolling element damage and cage wear in bearings of identical pumps. Searching for a reason 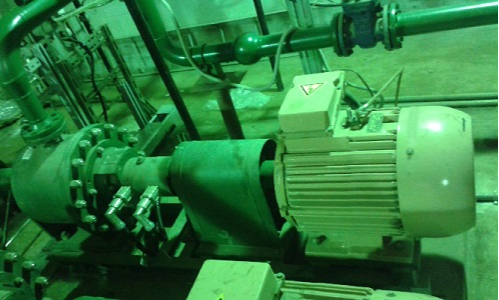 A little background. Since the beginning of operation (and only 5-6 years have passed) pumps TsN 65/90 with a drive power of 37 kW and a rotation speed of 3000 rpm were followed by frequent failures. Apart from the two burned out electric motors, the greatest problem was the frequent defects of the thrust bearings of the pumps, accompanied by their overheating and failure. Then the operating and repair personnel considered that the reason for this was high axial loads. On each pump, the bearing unit was modernized from the half-coupling side - an additional thrust bearing was installed, a hole was made for supplying grease between the bearings. It was assumed that two 46311 bearings should solve the problem. But that did not happen.

Diagram of the pumping unit with indication of vibration measurement points

Measurement data of the RMS vibration velocity of all four pumps in the range of 5-1000 Hz:

Vibration on electric motors is associated with resonance phenomena at a frequency of 100 Hz and is eliminated by adjusting the attachment of one of their paws. At the moment, it was not possible to eliminate the voids under the frames for the removal of natural frequencies from 100 Hz. But that is not the topic of this article. The bearings of the pump supports No. 3 are more interesting here.

On pumps No. 1, No. 2 and No. 4, an increase in the temperature of support # 3 over 55 ° C was recorded at their usual temperature around 40 ° C. Extraneous noise is noticed on pump No. 2. As you can see, the levels of vibration velocity of the pump support No. 3 are quite low. Now let's look at the RMS vibration acceleration in the range of 5-10000 Hz.

As you can see, the vibration acceleration parameters indicate high-frequency problems of bearing support No. 3. We identify the defect by direct spectra and envelope spectra of vibration signals. 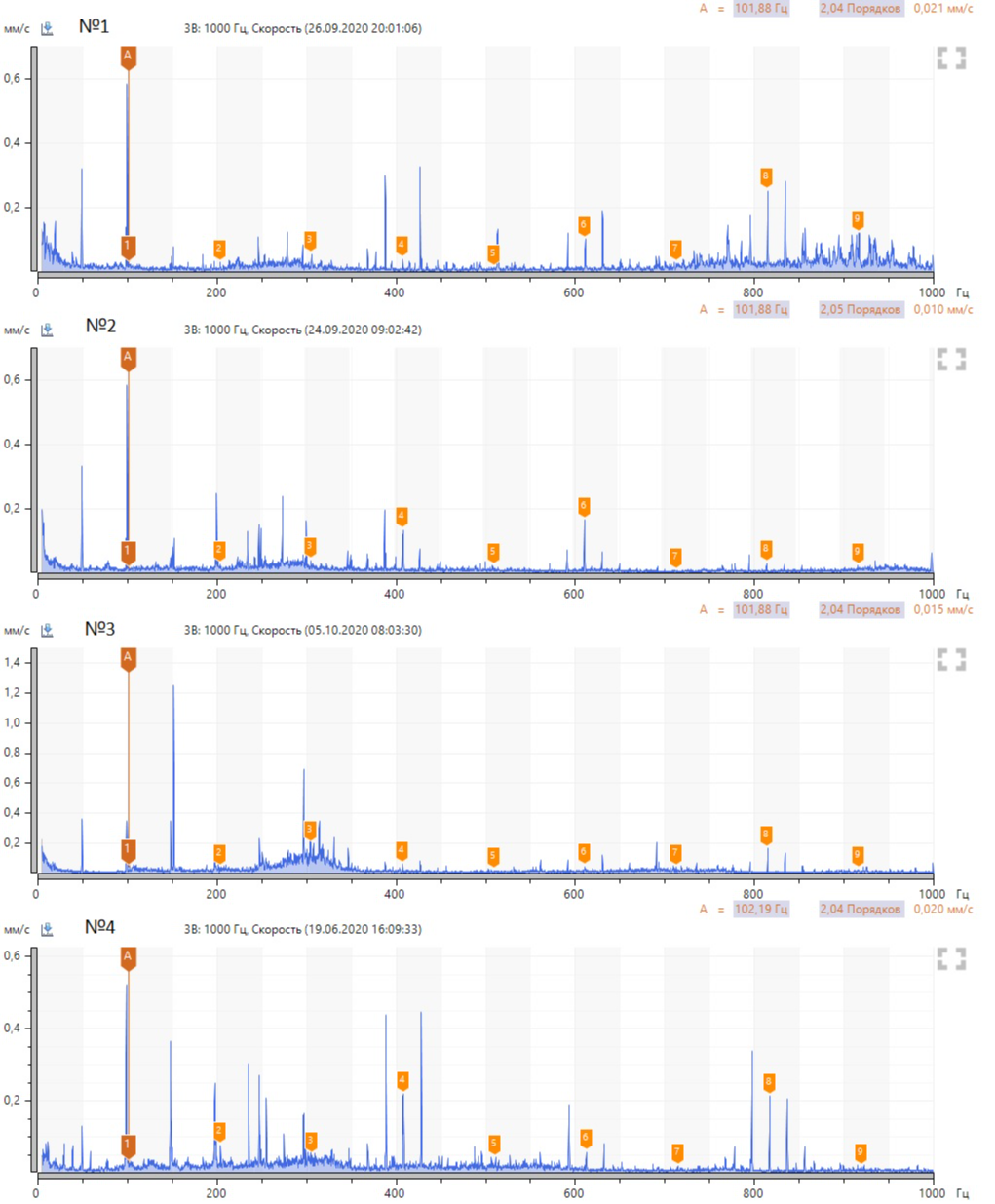 Vibration velocity spectra at points 3B of pumps No. 1-4 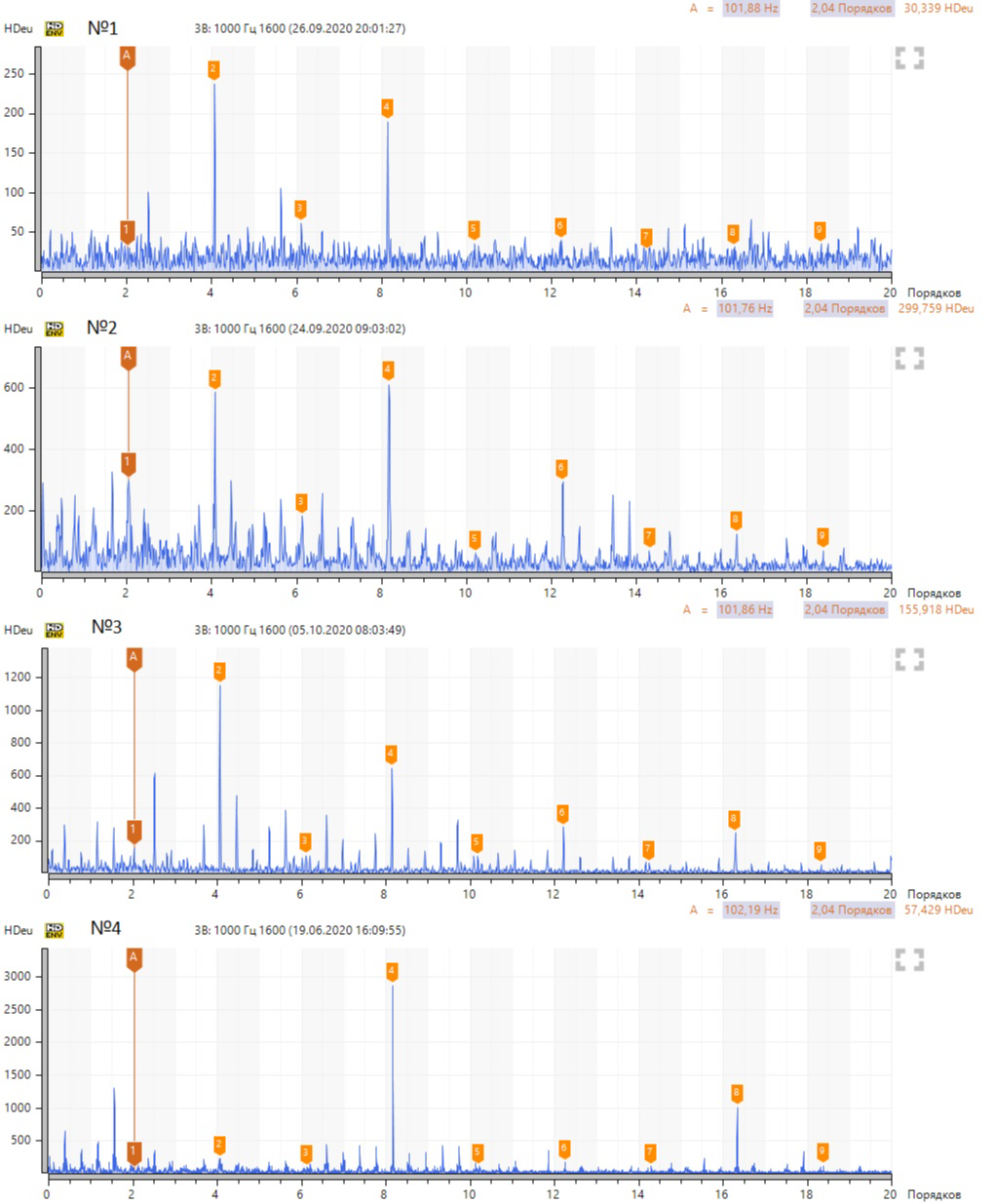 Envelope spectra of vibration signals at points 3B of pumps No. 1-4

Based on the results of the analysis, the owner of the equipment was sent vibration control protocols indicating the presence of defects in cages and rolling elements with a recommendation to replace the bearings.

Pump No. 4 was the first to be repaired. After dismantling the bearings, we take the thrust bearings 46311, clean and disassemble them. 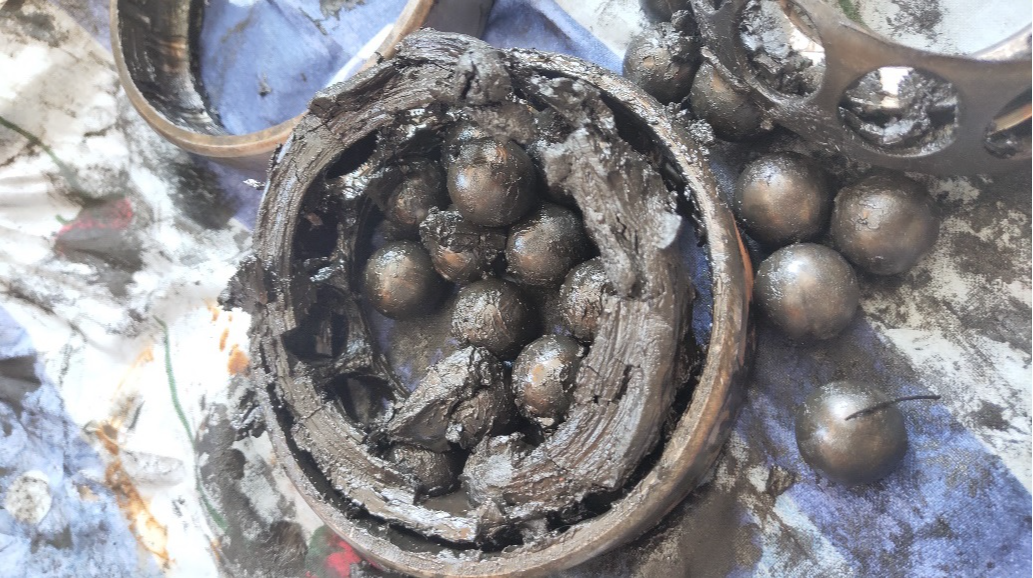 Both bearings have lost all their lubricating properties. The surface of the rolling elements is black as a result of exposure to high temperatures. At the same time, one of the bearings had several mechanical defects. 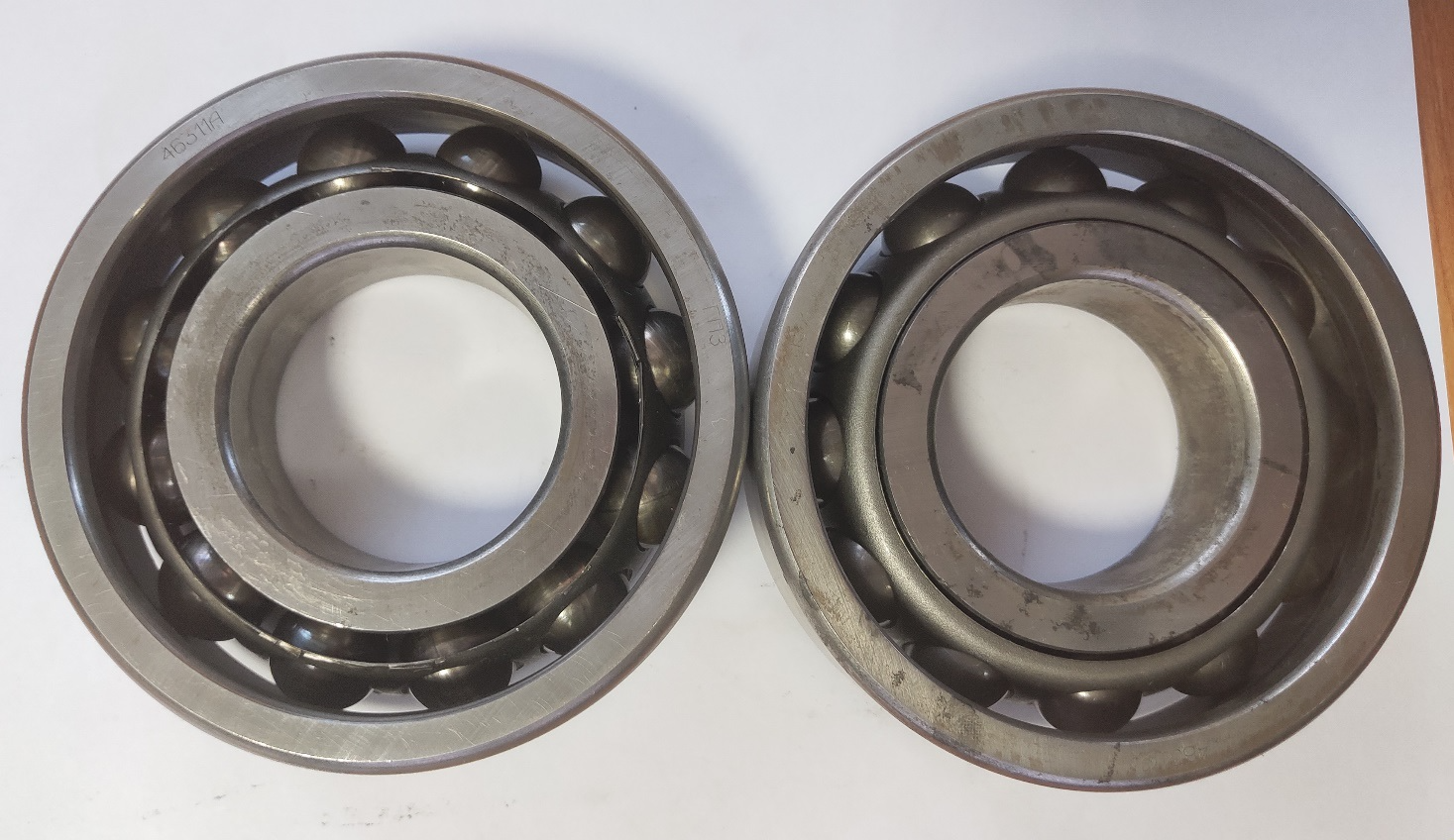 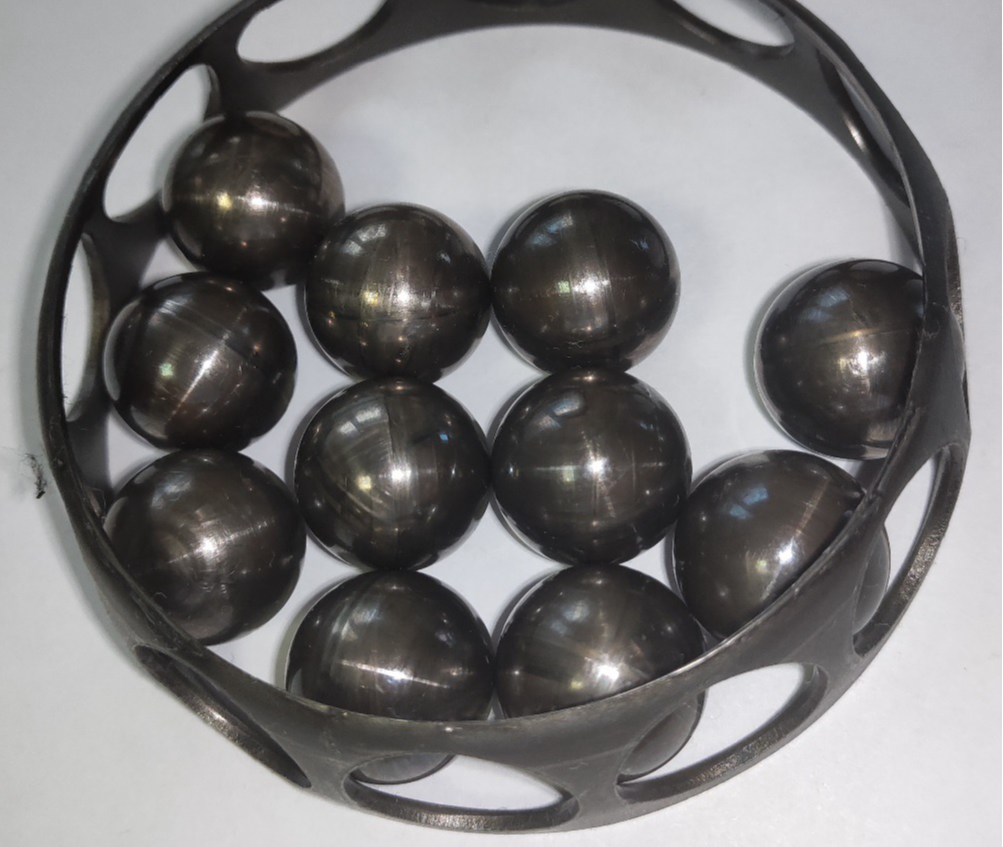 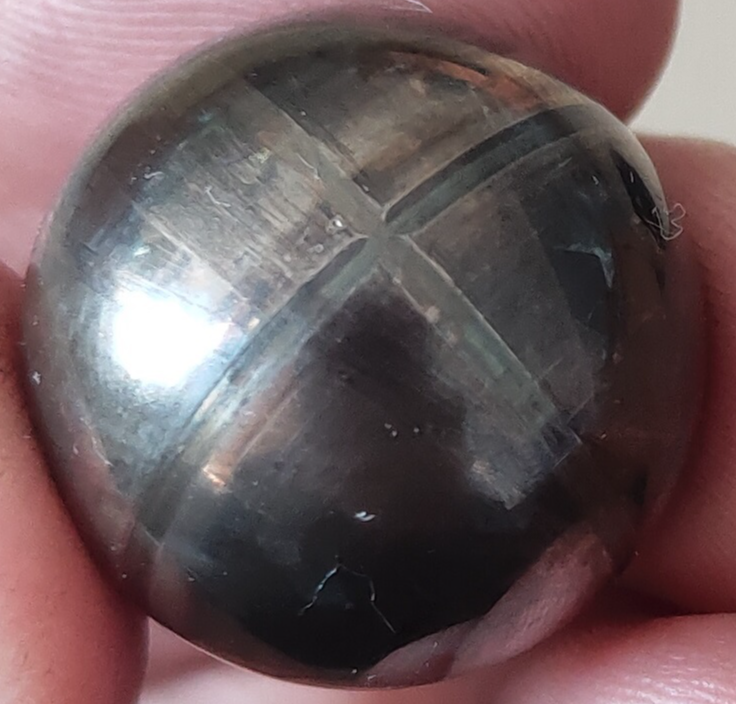 The nature of damage to rolling elements 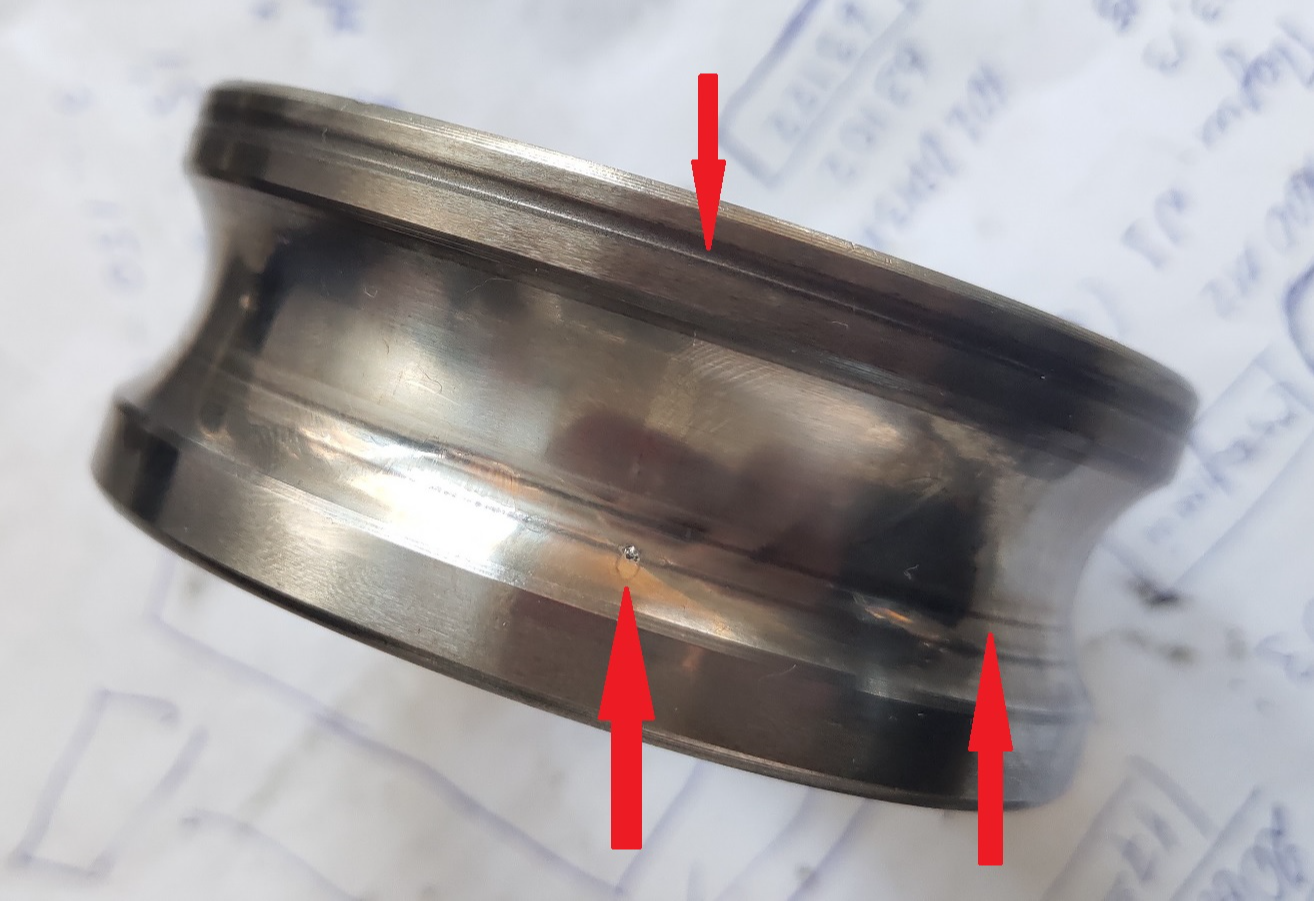 Traces of abrasive wear caused by rolling elements and cage, chipping on the inner ring

Additionally, I conducted a survey of personnel regarding the maintenance of the pumps. And if the representatives of the pump shop-owner answered evasively (it was not even possible to find out if there was a schedule for replenishing the bearing grease), then the repairmen assured that they had not been invited for maintenance for several years.

According to the operating instructions, the grease must be replenished every 1000 operating hours (42 days). Therefore, lack of maintenance is seen as the root cause of heating and bearing defects. The detected defects can be used to reconstruct the process of bearing destruction. Due to the lack of lubrication, the rolling elements of the cage holes were abraded, which allowed the cage to contact with the inner ring. As a result, several millimeters along the radius were erased, which allowed the cage to begin contact with the outer ring as well (the cage simply dangled in the bearing). Cage wear particles entered the bearing at the edge of the inner ring race, causing damage to both the race and all rolling elements. Due to high temperatures and the presence of impurities, the lubricant finally lost its properties and the movement of the rolling bodies along the tracks was accompanied by high friction (traces of friction on the tracks of the inner and outer rings). If you wait for the complete degradation of the cage, then the bearing would jam with all the ensuing consequences.

Based on the results of the bearing inspection, a certificate was drawn up and sent to the owner of the equipment. The help provided two recommendations:
- organize the maintenance of the pumps;
- weekly vibration control.

Such frequent vibration monitoring will help to obtain information about the change in the state of the bearings after repair, to confirm or deny my conclusions, and most importantly to control the maintenance of the pumps.